​​
After graduating from Ryerson’s media studies program, David Ferguson exhibited photography in Canada’s public art galleries.  http://www.dferguson.ca  He was concerned with the nature of representation and meaning, then with a desire to understand why we were changing the environment and climate as we were. Still life/tableau photography was his medium. While he stopped making photographs for awhile he continued to work in Toronto galleries as an installer. http://oaag.org/awards/2008winners.html After moving to a semi remote area in Bancroft to build an off grid passive solar home, studio and workshop, he became  involved with the Art Gallery of Bancroft. David was instrumental in the considerable growth of that organization for 8 years and served as the president for a 2 year term.  https://www.artgallerybancroft.ca During this same period he was practising the craft required to make things of wood. For 5 years his work was exhibited on the Bancroft and Area Studio tour. https://bancroftstudiotour.org David was challenged to make woodwork more expressive and now finds that by using text and design elements he can literally address some of the issues he approached with photographs. The influences of artists: Phil Bergerson, Garry Knox Bennet, Gord Peteran and Stephen Hogbin and contemporary thinkers ; Daniel Kahneman, Yuval Noah Harari and Alex Rosenberg are informing his work now.  Using installations of the furnishing based art he is making allows him to more effectively present the ideas and concepts and questions he encounters.
Currently David is taking some commissions and developing and promoting his work. The installation woodWord  which was shown at APFTA in June of 2020 is growing and overtures to other galleries are being made. 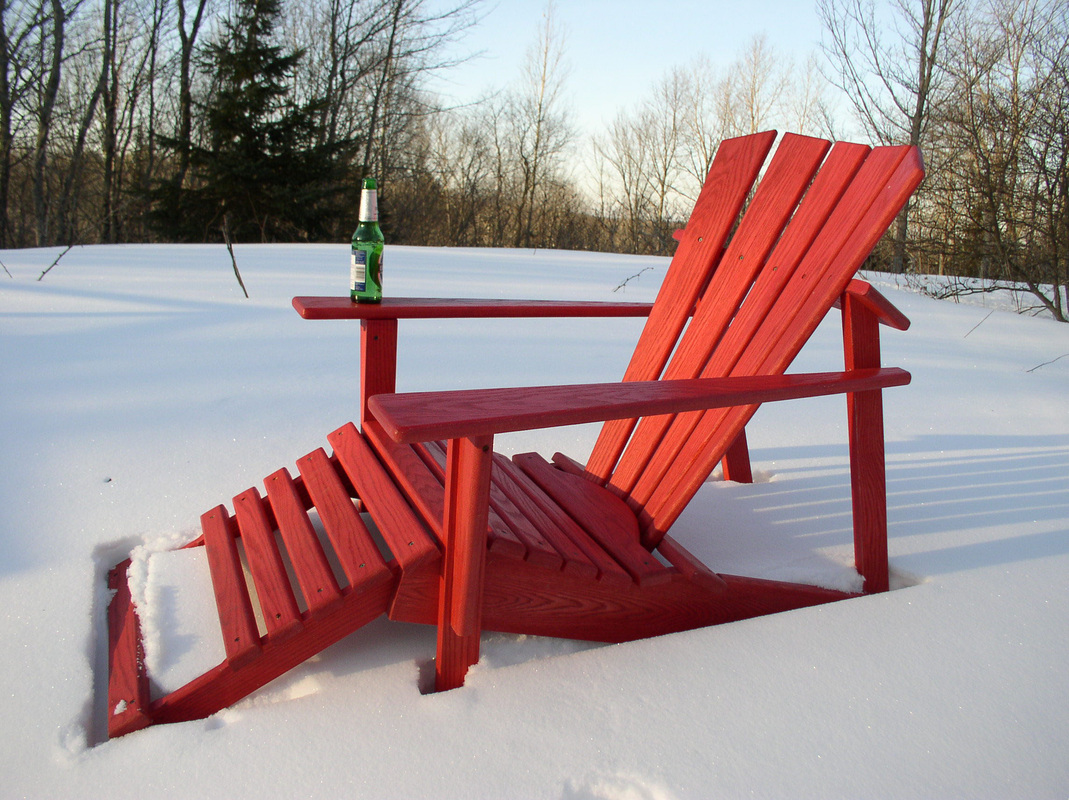 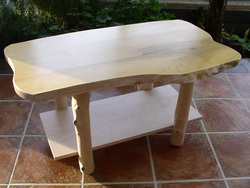 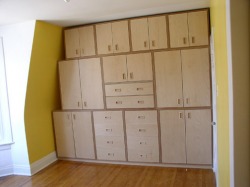 Betty and Doug wanted to create more storage for their wardrobes and what we came up with was this assembly of maple veneer cases with cherry wood edging in an arrangement that fit the unique shape of the bedroom in the older house and can potentially be taken apart and reconfigured differently or elsewhere. 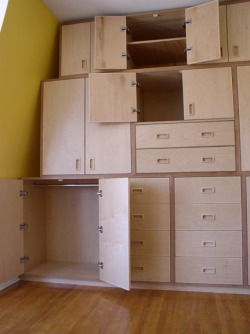 "They are awesome. The design was carefully constructed with us to meet our needs and to complement the cherry - pine bedframe. The closet wall cabinets are beautiful and I never tire of looking at them. And our clothes are finally organized and out of sight!" Betty Burcher 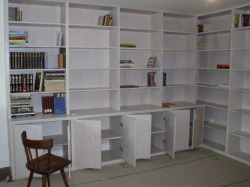 Margus wanted a lot of bookcase in the newly constructed house's office area. We decided on a white pickled paint process for the maple with recessed wooden handles for the cabinets and thick solid edging everywhere. 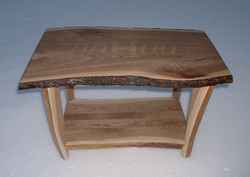 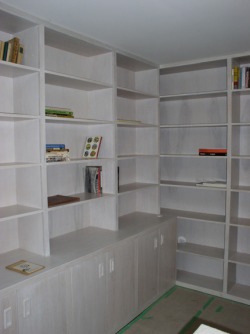 "David is a first rate craftsman with sensibilities and aesthetics that I share. This was very important for me as I frequently travel on business and David essentially completed the project by himself with very little input from me. It totally exceeded my expectations."  Margus 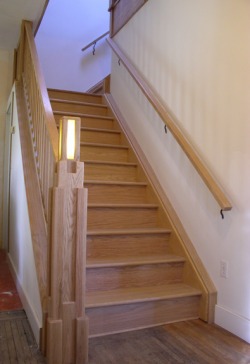 "We wanted an Art Deco looking staircase with a newel post that suggested the Empire State Building.  And that’s what we got. It’s beautiful, it’s unique, and it’s well crafted. We’re very proud of it." 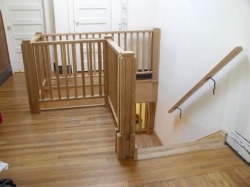 Joe wanted to replace the old narrow and too steep stairway when the groundfloor of the century old house was being renovated. We were able to use a lot of oak and make references to the arts and crafts movement and the empire state building.